One of the most frustrating things about travel is all the waiting you have to do.

Waiting to check-in, waiting to get through security and then waiting for your gate to open.

And even when boarding begins, you still end up queueing for another 20 minutes. But why does it take so long?

When I was waiting to board a flight this month, I cast my mind back to an episode of MythBusters from a few years ago, where six methods of plane boarding were tested.

And the most shocking thing was that the most popular method of boarding with airlines today was by far the slowest!

Let’s take a look at each boarding method in turn, and figure out which is the quickest, as well as the most satisfying to passengers.

How They Did It

To accurately test the speed of each plane boarding method, the MythBusters team built an accurate replica of a plane interior with 173 real seats along with overhead luggage compartments.

Passengers were stationed at a boarding gate and were given tickets with a seat assignment before each test. 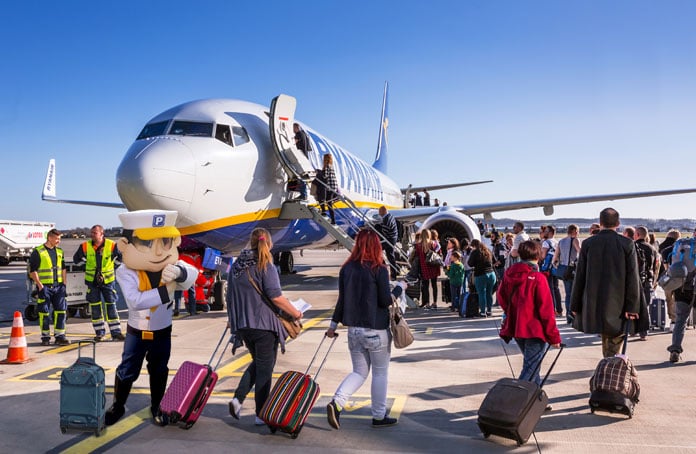 To make sure it wasn’t all smooth sailing, 5% of passengers were told to behave in a difficult way, such as making their way back down the plane in the wrong direction, sitting in the wrong seat, boarding with small children, or wasting time in the aisle.

Each method of boarding was judging on two metrics:

Let’s see what they found.

Back to Front Boarding 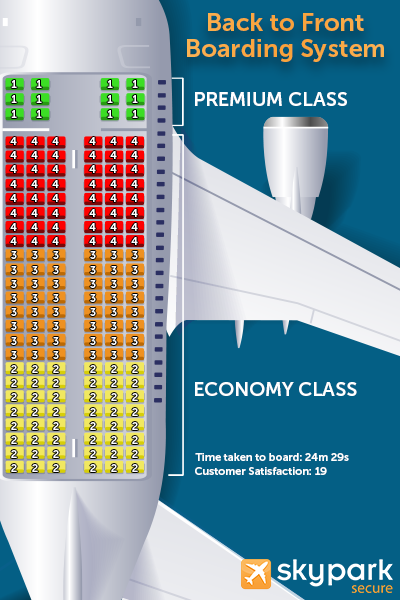 This is the boarding method you’ll be most familiar with as it’s the one used by the vast majority of airlines.

In this system, business class boards first. Then the rest of the plane is separated into zones, which each zone being boarded in turn, from the back of the plane to the front.

At first glance, this seems to be a sensible option as it keeps parties together, and keeps the number of groups to a minimum.

But in practice, it leads to too many people boarding at one time, causing traffic jams and minor altercations in the aisle, for an average boarding time of 24m 29s.

Additionally, it led to the majority of passengers viewing this method as neutral or bad on the satisfaction scale with a total score of 19. 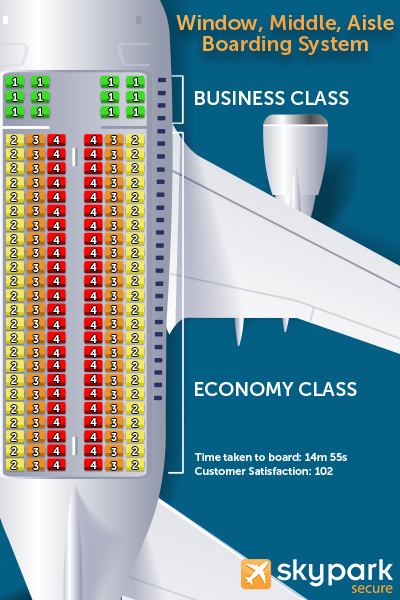 The next method of boarding uses the same number of groups, but arranges them in a slightly different way.

Business class is boarded first — you may see a pattern emerging here. Then all of the window seats are boarded next, followed by all the middle seats and then all the aisle seats.

And not only that, it seemed to go down well with the passengers as it scored a whopping 102 points.

A possible pitfall of this system is that parties may be separated, but apart from that, it seems a popular alternative to back to front boarding. 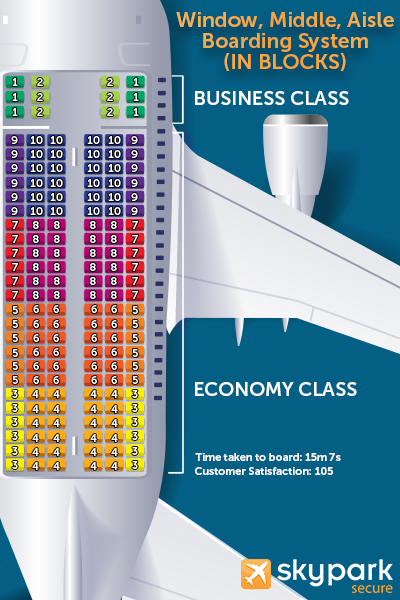 A slight variation of the traditional window, middle, aisle system is WILMA in blocks.

This boarding method combines WILMA with back to front boarding, starting with business class in two sections, followed by the window seats to the rear, and then the middle and aisle seats to the rear. We then move onto the window seats of the next section up, followed by the middle and aisle seats of the same section, and so on.

Results of this method were roughly similar to WILMA, taking a touch longer at 15m 7s, but being slightly more satisfying with 105 points.

All in all, the results are so similar that it’s difficult to choose between them, although this could be arguably more complicated because of the number of groups that have to be called. 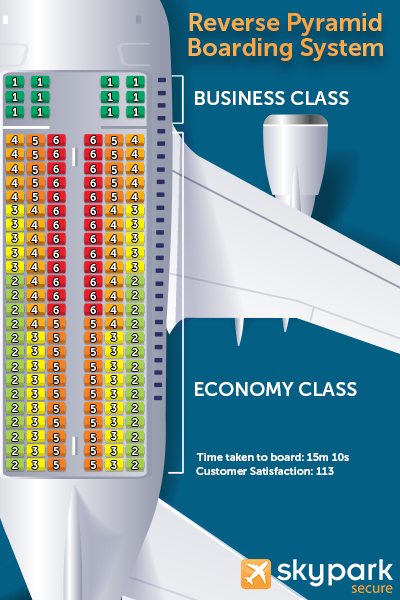 Once again we start with business class, but after that, passengers are instructed to board from the bottom outside edges inwards.

This method took three seconds longer than the previous one at 15m 10s, but it had the highest satisfaction rating of all at 113 points.

From our perspective, it seems that any of these three methods would be better than the current one we have in place, but the Mythbusters gang also tested two more random plane boarding methods.

Let’s take a look at those. 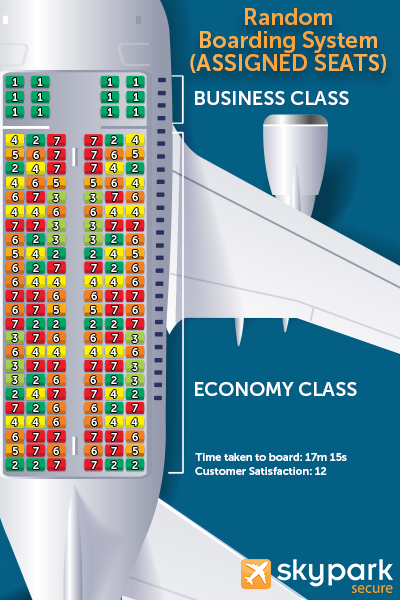 With this boarding method, passengers all had seats assigned. Business class boarded first, and then everyone else was let on at once.

This resulted in a boarding time of 17m 15s, which incredibly was still quicker than back to front boarding!

However, customer satisfaction was at just 12 points, which meant that this mad dash for your seat wasn’t particularly appreciated by passengers.

There is something to be said for letting passengers seat themselves, but the added chaos during an already stressful time may not be the best idea.

Which brings us onto…

By far the lowest scoring seating method. In fact, random boarding without assigned seats was the only boarding method to score less than zero!

This method is exactly what it sounds like: let business class passengers board first, and then everyone else sits where they like.

While this led to a boarding time of just 14m 7s, this can probably be explained by passengers rushing aboard to get the seat they want, or for a place next to their friends or family.

The insane scrum that must have ensured meant this method scored -5 on the customer satisfaction scale.

Not the way to start or end your holiday, that’s for sure!

So Why Don’t Airlines Let Us Board Quicker?

You can see from the summary above that there are at least three better alternatives than the back to front boarding we have to go through at the moment.

So why do airlines continue to make us board in the slowest manner possible?

The answer, as you might expect, comes down to money.

The current system, frustrations and all, allows airlines to offer more expensive tickets for priority boarding or similar services. If you take away the annoyance with having to wait, you also take away a precious income stream.

And that just won’t do for the airlines!

Plane boarding times may also have sped up even further in recent times due to the COVID-19 pandemic which is still ongoing. Some of these plane boarding methods may be quicker due to reduced capacity. As always stay safe!